Each year, ACE student-athletes vote on a theme that connects across all four program locations. This theme supports ACE’s value statement that “connecting with communities across the world through sports provides a unique opportunity for our student-athletes to develop as global citizens.” The 2019 summer theme is “hands,” and we’re going “#HandsIn! to show the way that hands connect us through teamwork and sports. Check out how this ACE team is “#HandsIn” this summer on their experience! Meet the members of the ACE in China 2019 team below. 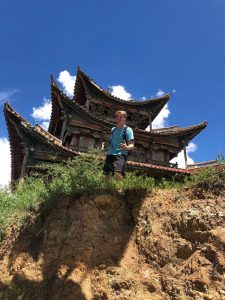 Alex Miley is a rising junior on the Duke Men’s Cross Country and Track and Field teams. He is majoring in economics and innovation entrepreneurship. He is originally from Maple Grove, Minnesota. A little known fact about Alex is that his three younger brothers are bigger UNC fans than Duke fans. And believe him, he’s tried to convince them that Duke Blue is better.

ACE was a program that he was interested in before he even decided to commit to Duke. The flexibility it provided with training, the civic engagement focus, the sites across the globe, and the collaboration with Stanford all contributed to his interest in ACE. As far as his experience in Shangri-La, China goes, his favorite memory has been running right before sunrise through the town and around Lake Napahai with his teammate Josh, and just soaking in the beautiful view that is filled with mountains, wildlife, and amazing architecture.

Alex’s infinite energy during camp has a positive impact that is quite apparent among the campers, and more specifically is evident in his knack for having fun. Furthermore, his loving and genuine personality make him a #HandsIn team member. 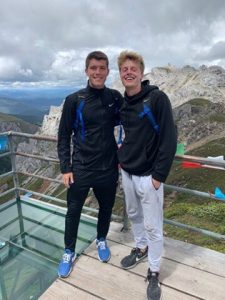 Matthias Frick is a rising junior on the Duke Men’s Soccer team. He is majoring in computer science and minoring in markets and management studies and economics. He is originally from Feldkirch, Austria. Something that not everyone knows about Matthias is that he had to serve in the Austrian military for six months.

Matthias wanted to do ACE because it is a unique opportunity to learn about a new culture while also building lasting friendships with Stanford as well as Duke student-athletes. His favorite memory so far is visiting old town Shangri-La and climbing one of the six sacred mountains of the town.

Matthias’s attitude is one of enormous passion and this creates a dedicated and fun atmosphere for not only the campers, but our ACE team as well. Along with this passion, he instills a kind confidence into all of those around him, which is why Matthias is certainly a #HandsIn team member. 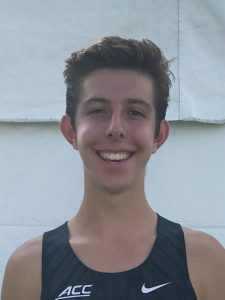 Josh Romine is a rising junior on the Duke Men’s Cross Country and Track and Field teams. He is majoring in computer science and minoring in psychology. He is originally from Highlands Ranch, Colorado. One thing that not everyone may know about him is that he spent a week on a boat scuba diving in the Florida Keys!

Josh thought ACE in China was an incredible opportunity to explore a country and culture different than his own. The chance to work with local kids, as well as learn about Tibetan lifestyles, was exciting. His favorite memory so far is the trip up Shika Snow Mountain. The views of Shangri-La-La and the neighboring mountain ranges were breathtaking. Beyond that, spending everyday getting to know each of the other Duke and Stanford student-athletes has been so much fun.

Josh’s quick-wit and extraordinary attention to detail allows the camp to run smoothly with a whole lot of smiles and laughs. Josh is one hundred percent a #HandsIn team member, and these are a few reasons why. 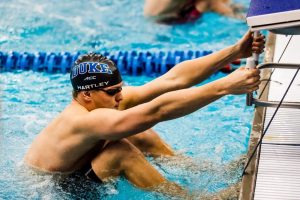 Nathaniel Hartley is a rising junior on the Duke Men’s Swimming and Diving team. He is majoring in computer science and minoring in psychology. He is originally from Lake Wylie, South Carolina. Something that not many people may not know about him is that he had an English accent because of his dad until the first grade, but his school made him take a speech class to get rid of it.

Nathaniel wanted to be part of ACE because student-athletes don’t really have a chance to go abroad and be immersed in a different culture because of their busy and demanding schedules. ACE was a perfect opportunity to be a part of something great and step outside of his comfort zone. His favorite memory so far is taking the cable cars to up 4500 meters and seeing the vast landscape of Shangri-La and part of the Tibetan plateau. It was cool being in the clouds and seeing the beauty of the surrounding area.

Nathaniel has a “go with the flow” attitude that keeps the campers on track. This also helps make things run smoothly for our team.  He has a contagious laugh that spreads joy to those around him. These qualities along with many more make Nathaniel Hartley a #HandsIn team member. 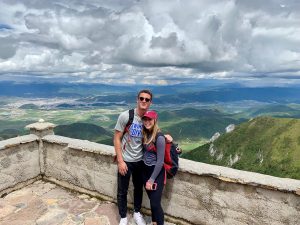 Noah Vigran is a rising sophomore on the Stanford Men’s Swimming and Diving team. He is majoring in management science and engineering. He is originally from Cincinnati, Ohio. Something that not many people know about him is that he plays the guitar.

Noah wanted to do ACE because his teammate who did it said, “ACE was awesome.” He also really wanted the opportunity to explore new places, cultures and people. His favorite memory was when the group went up to Shika Snow Mountain.

Noah’s constant positive energy, along with his reliable and steady effort keeps the team motivated and inspired throughout the day. A lot more could be said about Noah’s amazing character, but these are only a few of the ways Noah has been a #HandsIn team member. 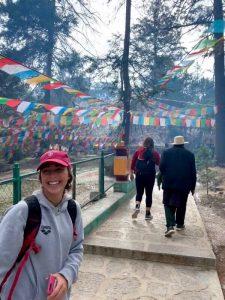 Carolina “Lina” Sculti is a rising sophomore on the Stanford Women’s Swimming and Diving team. She is majoring in International Relations with a minor in Chinese. She is originally from Rye, New York. A fun fact about Lina is that she loves the mountains and skiing!

Carolina was interested in the ACE program because it was a unique way to use sports as a springboard to learn more about and unify different cultures. Her favorite memory so far was when Matthias, Josh, Nate and Lina won their first basketball game against Milo, Kate, Jordan, and Madi.

Carolina’s spirited personality brings the engagement of the team up a whole new level. And speaking of levels, her understanding of the Chinese language is levels above that of the group. She is more than willing to step out of her comfort zone and help clear things up which leads to one of the many reasons Carolina is a #HandsIn team member. 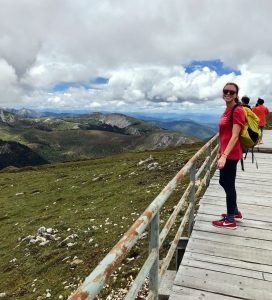 Areta Buness just finished up her senior year on the Stanford Women’s Lacrosse team. She received her degree in Biology and is pursuing a master’s in biology as well. She is originally from Paradise Valley, Arizona. Something that not everyone knows about her is that she loves painting and other visual arts!

Areta wanted to do ACE for the opportunity to learn about another culture and environment and connect with the local community through sports. Her favorite memory so far was taking a gondola up Shika Snow Mountain where she was high enough to see a full 360 degree view of the surrounding villages. In addition to the views, the group stopped in a valley half way up to try some fresh bread, yak milk, yak yogurt, and yak cheese made by the locals.

Areta’s maturity and calmness create an environment that both campers and leaders benefit from tremendously. Also, Areta’s passion for nature, and conservation is quite inspiring for the campers and our team which is why Areta is a #HandsIn team member. 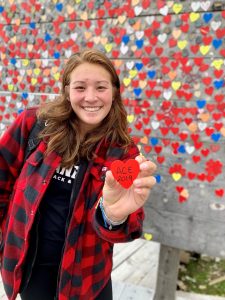 Jordan Fong is a rising sophomore on the Stanford Women’s Track and Field team. She will be majoring in product design. She is originally from Kent, Washington. A fun fact about her is that she loves being outside exploring new hiking trails or relaxing on the sandy beaches by the ocean.

Jordan thought ACE would be an amazing opportunity because she could experience a new culture and country while also sharing her passion for sports with the local kids. Her favorite memory so far was the second day of camp. During free time, one of the girls came and sat next to her and wanted to learn more English words. Together, they drew different objects and then wrote them in Chinese and English. Then the girl copied these down in her notebook. It was so cool for Jordan to see someone so passionate about learning. One of her other favorite moments is just getting to spend time with her awesome ACE team!

Jordan’s friendly, thoughtful, and caring personality is exactly what the campers see, and is why she connects with them so well. She has countless examples of authentically generous acts, and it’s felt by all of those that interact with Jordan which is why she is a #HandsIn team member. 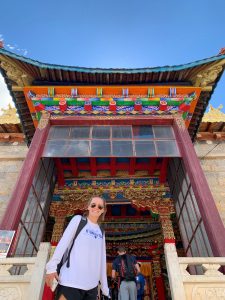 Madison Dunk is a rising junior on the Duke Women’s Lacrosse team. She is majoring in psychology and minoring in chemistry and Chinese. She is originally from Durham, North Carolina. Something that not everyone knows about her is that this is her first time traveling abroad!

Madison wanted to do ACE because it is a remarkable opportunity for her to connect with student-athletes from other parts of the country, while learning to navigate a new place and culture. Her favorite memory so far is exploring local monasteries in Shangri-La and learning about the area’s unique culture and traditions.

Madison’s selfless character and dynamic demeanor are vital for all of the activities that encapsulate camp. Along with Carolina, Madison also has an understanding of the Chinese language that is much appreciated by her team members. These positive qualities plus a much more expanded list is why Madison is no doubt a #HandsIn team member. 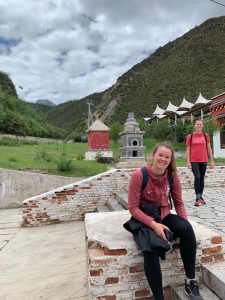 Kate Littlejohn is a rising sophomore on the Stanford Women’s Rowing team. She is undecided on her major. She is originally from Hamilton, New Zealand. One interesting fact about Kate is that he loves to travel and explore new places.

She wanted to do ACE to learn about a new culture and widen her perspective of the world through the experience. Her favorite memory is waking up in the mountains every day.

Kate’s gracious and considerate personality really helps the team blossom to our full potential. Her incredible listening ability is unparalleled and surely makes her a #HandsIn team member.