I found it amusing, as I stared at the screen in the headrest in front of my plane seat, that traveling half way around the world could be reduced to a small digital plane moving across pixilated countries in a 3D display of the world.  It felt surreal that countries I had read and studied for years now disappeared below me as I crossed land and sea.  I remember how absurd it was that I had traveled over Europe and the Middle East in a single day and how much history had happened miles below my seat; however, the thing I remember most vividly is seeing India on my screen for the first time and the thrill that shot through me. 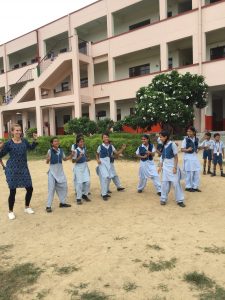 Months ago when we were notified of the program location that we were going to I called my parents to let them know and my mom was surprised. “Delhi? You picked a major city as your number one choice?” was the answer I received. This was exactly what I was going for – shock, surprise. Both my parents and I knew I was not a city person in the slightest but what better way to break the barrier of normalcy than a literal trip outside my comfort zone?

From the moment we arrived I knew I had made the right choice. Everything about India was what I was looking for in a truly in-depth experience.

My three weeks made me question, made me laugh, made me think, and made me open my eyes. I was forced out of my comfort zone, but I was welcomed with open arms by everyone in India, especially my students.

Every day I was greeted with little hands grabbing mine pulling me into their classroom. Every afternoon, at free time on the grounds, I was showered with flowers by all the little girls sticking them in my hair. After I was fully decorated, little hands once again pulled me to the field to play a variety of common Indian games. Nothing compared to the feeling of one of my students clinging to me, pulling me to her group of friends declaring “Mack is on OUR team” as she looked up and smiled at me. By late afternoon I was faced with a volley of questions that I received every day: “Are you sure you have to go?” “Five more minutes?” “And you’re coming back tomorrow, right?” It was heart wrenching to leave every day but that made returning in the mornings that much better.

The grounds were my favorite place to be with the kids because of the carefree attitude and conversational English I got them to practice without the feeling of an English class. No matter where you are in the world, a kid is a kid, and that includes letting out exasperated sighs, moans, and laughter when I would mess up in the game. It was so amusing to hear them laugh at me when I would make a mistake that I sometimes found myself acting more ridiculous than usual just to hear the endless laughter.

When I left home three weeks ago, my mom gave me a card at the airport and told me to open it once I arrived in Delhi. My favorite line was “you have the strength to face all challenges, the wisdom to make a difference, and a heart that is full of compassion.” Although my mom’s message was intended for me I made sure to pass it along to every one of my students.

I applied to this volunteer experience because the description was teaching and coaching but I found myself doing a third task: inspiring. It amazed me how such an intangible concept became so crucial to my three-week experience. How do you give something that can’t be held? I found my answer in a school in Delhi. Dedication. This word took on a new meaning for me in India as I dedicated my time and energy into the education and laughter of countless kids.

The children at Vidya gave as much to me as I gave to them. I sought to impart the strength, wisdom, and compassion my mom spoke of and in return I received memories, happiness, and a further drive to serve my community, which now included more of the world than just my home.

As I sat in my plane seat a few days ago, watching the little airplane move across countries away from India I was both sad and satisfied. I had to say final goodbyes to the people who gave me so much, but I was grateful for the experience I would carry with me forever. The best memories, the most profound moments, happen just beyond your comfort zone. I took a leap of faith and India was there to catch me.