Cuisine is one of the main pillars that make up the structure of one’s culture. You can tell a lot about the culture in an area based on what the people in that culture eat. The cuisine that encompasses the Chinese Yunnan region is unique to anything I’ve seen in the US. American Chinese food is vastly different from what we’ve experienced in just our first week being in China. Before we get to talking about the food, I want to highlight the etiquette that surrounds the whole dining experience. First off, tables are set so each person has their own bowl with a spoon (for soup & rice), small plate (for food & bones), and pair of chopsticks. Food is brought in and set on a large lazy Susan or cānzhuō zhuànpán as they say in Chinese. For lunch and dinner, they normally serve the same number of entries plus one more than the number of guests at the table, always with rice and normally with a soup. Each plate is placed on the lazy Susan and is free game for everyone to grab at. When going out to eat, the louder the restaurant is, the better it is viewed. It is often seen as disrespectful to eat all of your food as it is viewed as the host not being able to feed everyone. This was hard to follow as the food was always filled with so much flavor and immense taste. Here are a few of the  that stuck out to me as either amazing, surprising, strange, or all of the above. 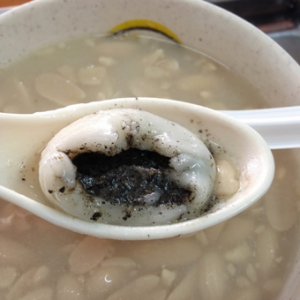 I got to experience tangyuan during breakfast our second day in China. My first impression of tangyuan was its surprising taste of peanut butter that filled the inside of the rice balls along with the black color the Sesame gave off. One of my favorite things about Chinese cuisine is how you can’t judge anything by how it looks and how everything is a surprise as to whether it will be spicy, sweet, or sour. The tangyuan rice balls reminded me of a surprising cereal in the way that they are both a sweet treat but instead of being crunchy is soft. Overall I enjoyed the Tangyuan and would recommend to anyone visiting to see the expression on their face when they take their first bite. 7/10 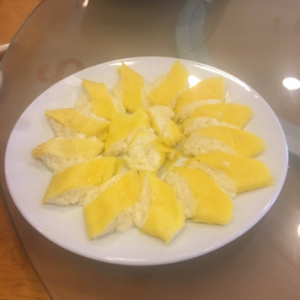 This dish at first glance looked like it was topped with a fruit like mango or pineapple but the yellow topping is actually an egg pancake and is covering the tangy yak cheese filling called Chhurpi. The center consistency reminded me of Greek yogurt but some of the others thought it more resembled ricotta cheese. Apparently, this dish is usually only made for special occasions, so it was an honor for the cooks to have made them for us. As for the taste, it didn’t have much of a taste but it was a little tangy. I would say I liked it but the texture doesn’t have me craving it in the future. 5/10 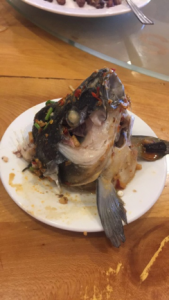 Now, this was one of my top picks. The full plate had multiple pieces of this Asian fish along with a head. The head is actually the best part because there aren’t a lot of bones and is full of meat. In Tibet, the honored guest is given the fish head as a symbol of respect. The eye was more of a challenge our tables did to see if anyone would try it. It was very slimy with a hard rock center that you couldn’t eat but overall it didn’t have a taste to it. the head itself was great it was full of flavor and I didn’t have to hassle with picking small bones out of the meat. The cheek was my favorite part due to it having a large chunk of meat that soaked up a lot of the flavor. Head 9/10, eye 1/10 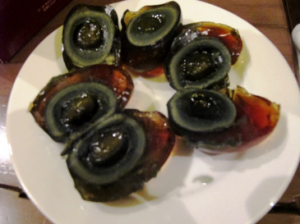 The century egg once again fooled me at first glance. They look like death and I expected them to taste the same but to my surprise, they were a delicious treat and a delicacy in many parts China. These were made from chicken eggs that were combined with a mixture of wood ash, salt, quicklime, and rice hulls fermenting for several weeks to several months. The texture is similar to Jell-O but the egg itself really soaked up the flavors during its fermentation. I defiantly recommend the century egg and hope to experience it again before I leave. 8/10 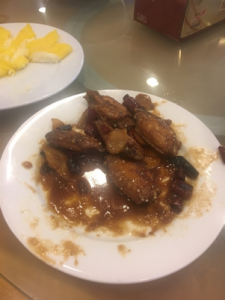 This dish is a little more familiar to Americans. Chicken wings are customary dishes in both the USA and parts of China such as the Yunnan region. The sauce on the wings served to us was some kind of homemade sweet sesame sauce. They were so popular at our table the kitchen staff brought out another plate and those too, went quickly. It was enlightening to see one of my favorite dishes from home in such a different place given with a cultural twist. 9.5/10