My fellow coaches and I rose early and often to witness the spectacular sunrises that welcomed us to each new day in Long Mỹ. But now the time has come for the sun to set on our unforgettable journey.

I hate that the last memories I have from my trip in Vietnam were the difficult goodbyes with the kids, my Vietnamese co-coaches/directors, and my fellow American coaches. At first those goodbyes cast a shadow over all of the phenomenal experiences I had over the past three-and-a-half weeks. But as I sit at home and ruminate over the trip, I realize that the anguish in those goodbyes reflects the value in the voyage I just took. I could honestly and easily write about how changed I feel after this trip—how it altered my entire life, how I’m now considering a career in international public service/education, how I fully intend on maintaining the relationships I have formed, and how I will make an active attempt to never again take for granted the privilege I have here in the United States. And all of that would be authentic. I mean that in every way. But what I feel the most moved and surprised by after this program is how much my concept of fulfillment and satisfaction has transformed.

Many people gave me bits of advice before the trip about how difficult it would be, how exhausted I would feel, and how I would need to find ways to cope with and adjust to the change. While I appreciate all of this advice, I can honestly say I never once felt uncomfortable or exhausted in a negative way. I felt uncomfortable in the most rewarding manner possible. I think all of my students and fellow coaches would be surprised to learn that I am relatively introverted, given how easy it was to step out of my shell when I arrived in Vietnam. It was easy to maintain all of the positive energy following each night of four hours of sleep because the experience was so enjoyable. It was easy to love every moment when everything was FTK (for the kids). At times I felt a little bit ridiculous constantly repeating the two Vietnamese phrases I knew best: “tốt lắm (good job)” and “em bị tiêu chảy (you have diarrhea).” I think every other sentence that came out of my mouth for three weeks was one of these phrases. I was even awarded the tốt lắm award after week two, when this became my signature phrase. Additionally, the first message I received from a student when I arrived back in the US was “Allie bị tiêu chảy. Allie go toilet.” But little nuances like these were what gave me satisfaction. Goofing around and learning new things about Vietnam every day made it harder to accept that we would eventually have to leave that country.

“What I feel the most moved and surprised by after this program is how much my concept of fulfillment and satisfaction has transformed.”

The short Vietnamese phrases were just the beginning of the fulfillment. The most distinct memories I have after the camp in Vietnam turned out to be the best days of my entire life (and I mean this in the least cheesy/cliché way possible). Week three was full of these memories. Firstly, the rain. On Tuesday, after the morning camp, Kevin and I were chasing a couple of our red team eighth-graders around in the pouring rain. We never could have predicted what would happen next; within a matter of minutes, every student and coach in the entire camp was running around in this monsoon of a storm, tackling each other and splashing water on each other. This lasted for about an hour before we returned to the bus in our drenched clothes and shoes; our bus driver was a man of few words, but it was no issue for him to tell us that we were not allowed to sit on the seats during the ride back. Just as my shoes dried [four days later], we experienced round-two of tackling each other in the rain, this time in giant mud puddles on the soccer field. I think I was definitely up in the ranks for “most-tackled-coach,” but I have never experienced fun in the same way. Who needs shoes anyway?

Following the first day of rain, I think I had the second best day of my life after walking into our ninth-grade classroom with a birthday celebration for Kevin waiting for us. In order to get into the classroom we had to maneuver through a tower of desks, and inside there were piles of balloons, a cake, a message on the board, and bags of flour. I learned quickly that it is tradition for Vietnamese children not to eat cake, but to throw it on people’s faces. I turned my back for one second and the next moment I had icing and cake shoved up my ears, nose, and in my eyes. I also learned that the children LOVE flour. And even more, they LOVE throwing it on everyone. On top of the cake, we were bombarded with handfuls of flour that also got into in every pore on my face. The thirty-minute cleanup was worth every second of this birthday celebration. 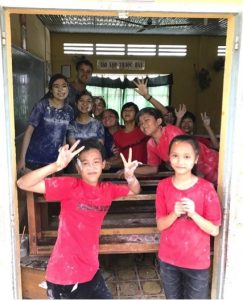 I knew right from the beginning of camp that all of the students had the purest of souls, but these simple, heart-felt experiences proved that for me. This was fun it its purest form. This is the fun I want to bring back to the US. Surviving without WiFi or Smartphones was in no way a struggle with days like these. Countless times at home I find myself bored without technology or a full-day excursion to somewhere mysterious, but my perception of boredom no longer exists just because I do not always have these luxuries accessible. Vietnam has prepared me to create fun wherever I am and it has purified my sense of gratification. I will always remember those days in the rain when I find myself in the midst of a rainy lacrosse practice, and I will never forget the purpose of a birthday cake on the other side of the world.

I think the students’ notion of fun extends further, and makes me realize how thankful and appreciative they are of the things they have. They consider themselves so lucky, despite having an absence of things I take for granted here. While it is unrealistic of me to say I will never again take my privilege in the US for granted, I can promise myself to sometimes just sit back and appreciate how pure simple treasures can be. I have even become appreciative of the sun that set on my remarkable time in Vietnam, thankful for the journey that was. Cảm ơn and tạm biệt (thank-you and goodbye), Long Mỹ, see you again.