“It was pure and genuine. We can recall a time in our childhoods when we did not care about being soaked by the rain – we welcomed it. This was a moment that reminded everyone to live in the moment and enjoy the shared experience together.” – Mitch Finesilver (Duke Wrestling) and Justin Kang (Stanford Men’s Fencing)

The ACE in Vietnam group always seems to get caught in the rain. Literally. For the third year in a row, the ACE student-athletes found themselves spending a day of camp dancing and playing outside in the rain alongside fellow Vietnamese coaches and middle school youth campers. Although not part of the student-athletes’ lesson plans, these moments of spontaneity have become a welcomed tradition for the ACE in Vietnam participants during the fast-paced environment of the three-week camp.

In partnership with Coach for College, ten student-athletes from Duke and Stanford spent three weeks of this past summer in the Mekong Delta teaching academics, sports, and life skills at a middle school youth summer camp alongside fellow Vietnamese university students. While the rain was refreshing due to the hot and humid weather, Eoin Gronningsater (Duke Men’s Fencing) and the rest of the ACE in Vietnam ‘18 group agreed that the relationships formed between coaches and students made these “rain moments” special. He wrote in a reflection blog post, “The rural countryside of Vietnam is one of the most beautiful places I’ve ever been, but what makes the country so special is the people in it. I will dearly miss all of the Vietnamese and American coaches and administrators that I had the opportunity to work alongside, but I can confidently say that what I will miss most is the children. They have left their mark on me, and I’ll never forget them.”

Anna Lee (Stanford Women’s Fencing) explained that during the camp, ACE student-athletes were matched with campers for a one-on-one sharing session to allow them to get to know each other better. She felt so impacted by the conversation with her camper that she decided to draft a letter of gratitude to the camper in a blog post. In the letter, she addressed the transformation prompted by her conversation with the camper and wrote, “Most importantly, I will never forget the sharing session that changed everything for us. I wish I knew Vietnamese so that I could explain to you how thankful I am that you shared your story with me. Your story has shaped me in a way that I know will last forever, and I owe you so much for that.” Spontaneous moments and special connections like these helped solidify the bonds that had already begun to form between the American student-athletes, Vietnamese university students, and middle school campers throughout the three weeks at camp.

“It was amazing seeing a little slice of the kids’ lives – where they live, where they hang out, and how they travel from place to place.” – Alyssa Marsh (Duke Women’s Swimming & Diving)

Both the Vietnamese coaches and the middle schoolers’ families also helped make the ACE in Vietnam group feel at home during their stay in the rural countryside of Vietnam. On the Fourth of July, the Vietnamese coaches planned a surprise barbecue complete with sparklers and a performance of “The Star-Spangled Banner.” While the Vietnamese coaches brought an American holiday to life in Vietnam, Alyssa Marsh (Duke Women’s Swimming & Diving) explained in a blog post that the middle school campers and their families also invited the ACE group to visit one of the camper’s homes and share a meal together on the last day of camp. Marsh wrote that “It was amazing seeing a little slice of the kids’ lives – where they live, where they hang out, and how they travel from place to place.” 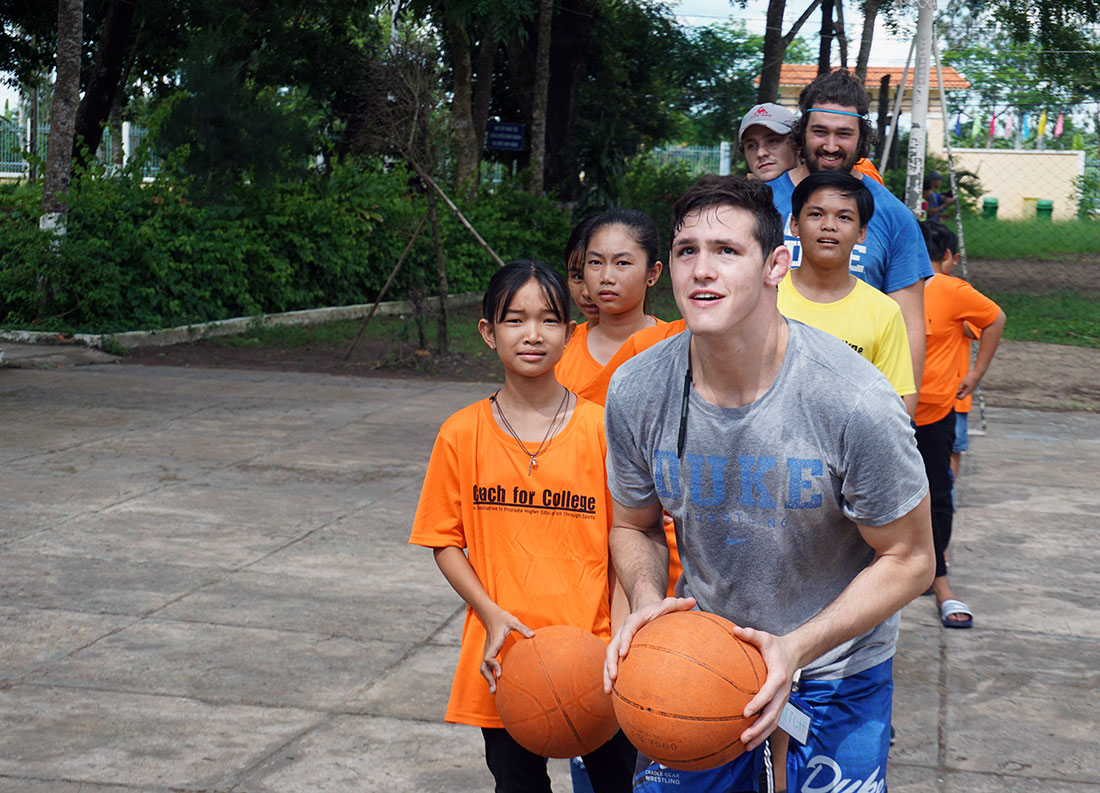 These immersive experiences also illustrated the value of international civic engagement programs, such as ACE, for student-athletes like Justin and Mitch. Although both Justin and Mitch had plenty to think about back home, they both expressed gratitude for the new perspective ACE offered. Justin wrote, “When you’re doing something meaningful and impactful, you lose track of time and focus in on the only thing that matters. In going to Vietnam, I distanced myself from my worries at home,” while Mitch explained that initially “I was hesitant to apply for ACE. I feared being away from wrestling for three weeks. I had goals and dreams, and I thought if I was away from wrestling that long, my goals would be stifled. However, what I learned through this experience was just as valuable. Not just for my current goals but for my life after wrestling. This experience puts things in perspective. It humbles you!” Just like the day in the rain, the ACE in Vietnam ‘18 experience as a whole offered a fresh perspective on reflection and humility for these ten ACE in Vietnam student-athletes.