We had been traveling for so long that I had lost sense of what day and time it was. As I wandered through the airport in Kunming, China, I couldn’t help but stare at all the unrecognizable signs written mostly in Chinese, though some had English translations written underneath. Before leaving for this trip, I hadn’t traveled a lot. I had never been out of the country, and when I did travel within the country, it was mainly for athletic competitions. This was my first opportunity to truly explore another part of the world, and I was excited but nervous about the language barrier. Although my grandmother spoke Mandarin Chinese, I never got a chance to learn it from her before she passed away. As I stepped foot into this foreign country, the only Chinese words I knew were “ni hao” for hello and “xie xie” for thank you.

The exhaustion was starting to catch up with me as I stood in line to re-check my luggage for the final flight to Shangri-La, China. As I was standing in line, I began to notice that one particular woman behind me kept standing so close to me that she accidentally bumped me with her suitcase multiple times. And as the man at the baggage check counter worked with a coworker to understand my English and nonsensical hand gestures, the couple standing behind me walked right up to the counter I was already standing at. This irritated me a bit, because I was clearly still being helped, but I brushed it off. 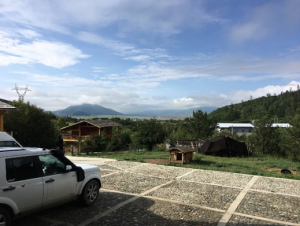 As I learned that day, and as we discussed later at the CERS center, it is not customary for people to stand in line in China. The people behind me were not trying to be rude or pushy–they were just doing what they were used to. In America, concepts like personal space and line-making are assumed. In China, it is more common to crowd around until you manage to make your way to the front. And line-making isn’t the only difference I learned of. I also found out that in China, slurping your noodles is considered polite. When it comes to restaurants, louder is better, because it means more people are enjoying themselves. Driving rules are… optional, at best. And if you wear a green hat, it means that your girlfriend is cheating on you.

“Being in China has made me appreciate the value of cultural differences and question the habits of my own daily life.”

Learning all this was pretty surprising for me. I was prepared for the language barrier, but I had never considered that there would be this other sort of unspoken cultural barrier. With language, there can always be a translation, and you know when someone is trying to communicate with you. But when it comes to unspoken local practices, it is not always possible to know when you are doing something taboo or accidentally offending someone. Although this was a frightening concept at first, over the past week I have learned to embrace it by making an effort to fully immerse myself in the culture. So far, we have visited a monastery, driven far into the mountains to visit a nunnery, walked to a botanical garden, wandered around the city, and started camp with the local kids! 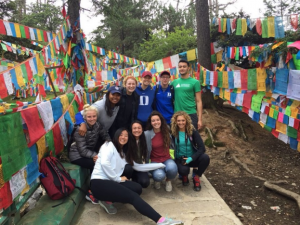 It is interesting to discover new cultural differences between the United States and China firsthand, particularly because it makes me reflect upon the unspoken daily norms from home. For instance, why do we have specific foods delegated to breakfast and others to lunch and dinner? Here, though there are some foods that are more common during breakfast (such as hard-boiled eggs), the flavors of all three meals are the same. For breakfast today, I had a bowl of rice noodles with seasoned meat, which is not much different than the seasoned meat and rice we have for lunch or dinner. Being in China has made me appreciate the value of cultural differences and question the habits of my own daily life.