This is how I have described my experience in Vietnam since coming back to America. I have talked about the daily schedule, beginning at 5:20am and wrapping up at 8:30pm. I have talked about how it was both demanding yet rewarding and how the sheer exhaustion we occasionally felt was quickly negated each morning by the smiling faces that greeted us as we drove into the schoolyard. I have spoken about how when Friday rolled around and we realized another week had flown by there was always a tinge of sadness because we knew we were just one hour closer to leaving. I have come to realize there are an unending number of stories I could tell about my trip. However there are also so many retrospective feelings that I cannot seem to put into words. To say this short trip has left a lasting impact on me, my thoughts about the world, and the way I interact with others, would be an understatement. 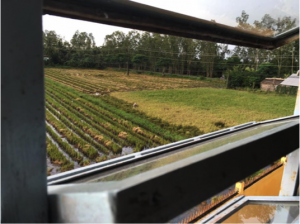 On a personal level this trip has broadened my horizons. For one, I had never really left the country before this. You could also say I was a Grade-A picky eater before being placed in a country with no kids’ menus and no mac and cheese. I have gained a newfound taste for seafood, exotic fruits and vegetables, and even meats that I certainly would never have tried back in the states. I have learned — though truly only skimmed the surface — about another culture, its virtues and values, customs and traditions. 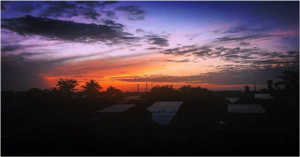 In terms of my worldly view, I was hit hard with a reality I had never known. At first, I was aghast at the thought of using a toilet that was nothing more than a hole in the ground and showering each night with water that was far from heated. However, these minor inconveniences were soon placed into perspective as my eyes were opened to children who couldn’t make it to school because they were harvesting their families rice fields. They were opened to a country with no clean drinking water and to a young man who came to school every morning having had his only meal of the day for dinner the evening before. They were opened to a town of people whose one-room shops were also their family homes. This was their lives, and while it may have been profoundly unlike my own, my eyes were quickly opened to people all around me living happily and joyfully.

“To say this short trip has left a lasting impact on me, my thoughts about the world, and the way I interact with others, would be an understatement.”

I was also quick to gain a respect for how the Vietnamese people I met interacted with one another and with me. I have learned the virtue of patience through the unending patience shown to me by both the Vietnamese students and college kids as I butchered the same Vietnamese word for the 400th time or my food slipped once again through the grasp of my chopsticks. I have learned the beauty of hospitality — how no matter how different or foreign a person may be, if you treat them with respect and like your own family they (as we were) will be forever in awe of your graciousness. I learned about friendship, in its truest form, the form where communication is not necessary because there is a mutual respect and admiration for the other party. I admired my students for their unrelenting desire to learn. I admired my fellow American coaches for their wit, their humor, and their dedication to the students above all else. And I admired our Vietnamese counterparts for their tolerance, their ability to be the go-between for us and the kids, and for their desire and willingness to better themselves. 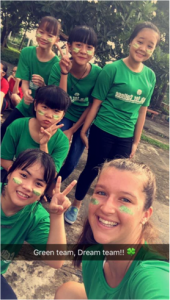 So while I still may never be able to put into words what this trip was like or how it has impacted me, I will end with a word of thanks to everyone involved in this amazing journey, do best believe that although goodbyes have been said and this chapter has ended the memories and lessons I have learned will not soon be forgotten.