In a place like New Delhi, it’s easy to feel overwhelmed by the differences between home and away. Personally, I (Kristina) felt very wrapped up in the culture shock of food, clothes, manners, and especially language.  Feeling out of place, at first, was an experience of solitude I’ve never had to work through before, seeing as I’ve lived in California my entire life and haven’t branched out very far.

What has been so great about ACE is that my first experience of culture shock wasn’t as solitary as I originally felt on day one.  The more I talked to my 9 athlete peers, the more welcome I felt in a different environment.  What’s been especially interesting has been talking with Judd about his experience in New Delhi.

Both Judd and I come from very similar backgrounds: Southern California natives.  Even though we grew up only 20 minutes away from each other, our interpretations of New Delhi have been distinct.

Kristina and I (Judd) both coming from suburban Orange County has definitely influenced the way we experience things be it at school, at home or abroad. I thought it would be interesting to see the differences in our individual experiences here despite our shared roots. To best demonstrate this, we decided on some questions to ask each other and have a conversation around. The rest of the post features a few of the questions we talked about, and our respective answers.

Question 1: How do you think being raised in SoCal has influenced the way you experience India?

J: Southern California and the OC in particular has a very diverse population. Many of my friends from elementary school through high school had parents or grandparents from other countries, mostly from parts of Asia, India and Latin America. Though I would by no means describe myself as ‘worldly’ in any sense of the word, I believe that coming from an area where different homes have entirely unique cultures prepared me for my immersion into India a bit better. On top of that, SoCal has a reputation of being a fairly laid back place, and I truly believe that growing up there gave me an ability to take things as they are, which has helped lessen the amount of culture shock that we have experienced in our two weeks here.

K: Being from suburban Orange County, India is nothing short of culture shock.  I grew up a 10 minute walk from the beach and went to a 100 year old high school (which sounds astonishingly old for the US). Before leaving for India, I was lucky to be able to talk to some friends who lived in New Delhi throughout their childhoods, so I had a pretty good idea of what I was going to see coming to India.  The best advice my Indian friends and family gave me was to walk into New Delhi with no expectations; just maintain a laid-back, SoCal mindset of quick acclimation with no preconceived judgment.  In India, I’ve seen buildings thousands of years old, and schools that don’t nearly have the facilities or structure of California schools, but I think my flexible mindset and diverse relationships have served me well acclimating.

Question 2: How do you think the Stanford/Duke experience as a student-athlete has been similar or different, and how has that prepared you for ACE?

K: Having never been to the South (except for the occasional weeklong nationals trip to Alabama), I can’t even imagine what sorts of cultural differences there must be between Durham and Silicone Valley.  Not only are our university experiences geographically different, but I could imagine that Judd and I would differ in athletic and academic experiences as well.

The largest major at Stanford (my major) is Computer Science and Judd studies Econ (although he knows a little about CS as well, minor), so even our focuses change the way we see the world.  For myself, when I look at India’s problems (traffic, waste management, clean water availability, etc) I always try to find tech ways to solve these things because of my academic background, so I could imagine Judd sees things differently as well.

As for athletics, with my little knowledge of swimming, it seems difficult to make a comparison between the two, but softball is primarily a sport of strategy and depends on strength of mentality.  Games are very long and unpredictable, and your performance depends almost entirely on mindset.  This facet of unpredictability has helped me adjust quickly to new environments and handle discomfort very easily – it’s kind of like the mind games we use for better performance in softball.  I think every sport requires a healthy capacity to adjust frequently.

J: Not only do we come from schools 3,000 miles apart, but we also come from sports that are drastically different in swimming and softball. Some may say swimming is an individual sport, and yes, competing is done by yourself for the most part, but everything is done for the good of the team. The focus on team-wide performance is something that I see as a similarity across our sports. Another big similarity that has helped us in our time here is staying comfortable in uncomfortable situations. I can recall a common theme from all my coaches during my swimming career; an emphasis of being comfortable being uncomfortable. While this mainly relates to pushing your limits in practice, it has helped here in cases where I may not have had any preparation and have had to dive into something new. Talking with Kristina, softball has a similar mindset with regards to practices and games.

Differences in this case come mostly from our two universities. Both have a similar number of students and a high prevalence of student-athletes on campus, however the locations and academic structure are clearly unique. Stanford in NorCal definitely would be more familiar an environment for Kristina than Duke was for me when I moved across the country to Durham.  Stanford’s quarter system and the semester system at Duke also lead to different stresses in classes. We both major in the respective largest majors at our schools (Computer Science for Kristina and Economics for myself), which leads to different perspectives. I have definitely noticed seeing things in Delhi from an economic welfare and development standpoint and I am sure that Kristina has her own way of seeing things here too.

I really love the kinship that Indian people show each other. – Kristin

Question 3: What has been your coolest experience teaching the kids here?

K: For some quick background, I have never worked with kids before in any setting.  I grew up in the disabled community because my brother has Autism and throughout high school I worked with those kids.  In softball, surprisingly, I never taught young kids.

So, as you could imagine, being thrown into four classrooms of second and third graders with Taylor was a wildly different experience than anything I’ve done before.  I had no idea what to expect from kids that age, and to throw a language barrier to top it off… I was in a little over my head (so I thought).

But the reality was that I wasn’t in over my head, at all.  Our kids are so endearing and affectionate, it often blows me away.  They love to make us paper flowers and string bracelets.  Sometimes they try to share their lunches with us.  They always raise their hands enthusiastically, screaming “ma’am, Ma’am, MA’AM!” when they know the answer.  My favorite experience was coming in from recess.  We had to climb two flights of stairs to get to their class, and I had one kid holding each hand, 2 kids on each wrist/arm, one on either side of my waist, and three putting flowers in my braided hair.  I did not expect the love they’ve shown me in such a short amount of time.

J: I was taken aback by the energy the children have. My only previous background working with kids around the same age range (between 9 and 13) has been in coaching swimming in my local city league over the summer. The energy level of kids back in California that I have coached is dwarfed by the constant bouncing off the walls and excitement of the Indian children. I am greeted every time I enter a classroom with a resounding “Good morning sir!” in near unison from all members of the class.

The coolest experience in teaching that I have had has just been observing their willingness to learn and how it contrasts with my memories of being their age in school. If I ask a question, I am instantly hit with more than ten answers, each coming from a different one of my students. They almost compete with each other for who can have the most correct answer and who can do it the fastest. I remember being in their position and teachers would ask questions and there would only be a hand or two raised if that. We were hesitant to answer difficult questions and afraid of being wrong in front of the others in class. Making mistakes and learning from them is important in school and I find the enthusiasm my students have for trying to answer my questions really impressive. 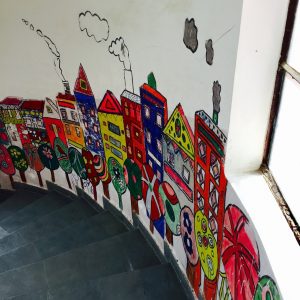 Question 4: What Indian values and traditions do you think you will bring back with you to your home, school and team?

J: People respect each other here. For such a diverse country in language, food, religion and culture it is inspirational seeing the way everyone treats their fellow Indians. It is something we definitely should have more of back in the states. That respect extends from everyday things to respecting different cultures and ways of life. In the US I feel like I see a lot of unique cultures lose some of their distinction as everyone tries to be ‘American’. Here, there is really no one true ‘Indian’, since everyone is so different. People preserve their own traditions and respect the traditions of others, which promotes a level of appreciation for diversity that we are missing back home. Hopefully there are some things that come with this mutual respect I have seen that I can incorporate into how I treat others everywhere I go.

K: I really love the kinship that Indian people show each other.  Being in a class of young kids, you’ll see little boys holding each other’s hands or girls pinching each other’s (or my) cheeks.  The kids love to give us hugs, and even slapping one another is a show of love in India. You would think that these mannerisms are things of young children; however, I’ve seen plenty of adults express their care in similar fashion.  The sentiment of touch and honest appreciation for others is undervalued in my experience of American culture.  I can definitely admit to a lack of affection or intimacy in friendships, so I would like to be certain that the people I care about know that I value each of them when I return.