On our first morning, we drove through the streets of the Nomzamo Township to the ACJ Phakade Primary School where we would be running a sports camp for 6th and 7th graders in the community. As we pulled up to the school, I could see smiling children waiting for us patiently outside their gated school. I was slightly hesitant to interact with the children as I stepped out of the van because I was unsure of their English-speaking abilities, but I could tell they were all excited to see us by their beaming smiles and waving hands. They made us feel welcomed by approaching us and asking us our names and what sports we played. I found this to be quite surprising and bold, since I could never imagine myself at that age walking up to a complete stranger who was almost double my age and speaking in a foreign language. As the day went on, I started to form teacher-student relationships with a few of the children. I even learned a few words in Xhosa, which is their native language. They promised to teach me a few new words the next day, as long as I promised to come back to teach them new sports and games. 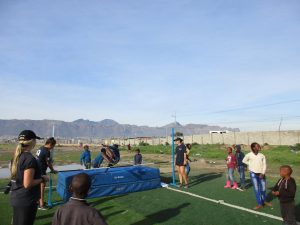 I found that not only did they show compassion toward us, but also toward their fellow classmates. I noticed a few children at some of the stations did not completely understand the instructions we were trying to give them, so they tried to help each other out. One child would relay the information to the others, and you could see how everything finally clicked. Instantly, they could perform the drill we had been trying to describe to them. Cooperation seems to be a common theme in their culture, since this was not the only example I witnessed throughout the day. As we packed up the equipment, I noticed a group of children pick up the equipment and carry it off the field as we rounded up the rest of the group. We had not asked them to help carry anything, but they just did like it was second nature.

After the first few days, the children had drastically improved in the drills we had been practicing. The cooperation that I witnessed from the start remained present, but I started to notice the competitive spirits shine within the children. They began to have mini competitions between one another. We all noticed this and decided to create a field day with ten different stations ranging in sports from field hockey to rugby to basketball where they would be able to record all their personal bests on their sheet of paper. Once they had completed all the stations, they all gathered around us as we announced the records set at each of the stations. They all congratulated each other, but I could tell they wanted their name on the record board. We promised them that we would set up another field day again over the course of the sport camp, so they could have another go at the ‘ACJ Phakade World Records.’