As my time in Vietnam comes to a close, I realize that this experience has been a life lesson in unexpected conjunctions.  According to Webster, a conjunction is a situation in which two or more things happen at the same time, in the same place.  It is also a word (and, but, or) that brings things together (I was an English teacher!).  My realization is that over the last three weeks, the connections I have made with people whose language I can barely speak has unexpectedly connected me at a deeper level than I thought possible given the very real nature of our language barrier.

It hit me yesterday when one of the boys on my color team came to me and gave me a huge hug. He looked up at me, and I could see how sad he was. With a frown on his face, he said to me  “two more days,” a simple enough phrase for me to understand, and hugged me even harder. It was at this moment that I realized the impact I had on these kids. They really looked up to and connected with us even though they could barely understand a word of what we said.

Today, on the last full day of camp, the same boy came up to me and said, in Vietnamese, “Can you just take me back to America with you and raise me there?”  I stood quietly, and really heard his words; this 13-year-old boy doesn’t want me to go, and I don’t want to leave him. If only it was as easy as bringing him home as my carry on!

My realization is that over the last three weeks, the connections I have made with people whose language I can barely speak has unexpectedly connected me at a deeper level than I thought possible given the very real nature of our language barrier.

It occurred to me that people can be conjunctions too. My Vietnamese coaches were constantly my side and translating for me and connecting me to the kids. There was never an issue we couldn’t solve. I wouldn’t have survived without them. They had the patience to listen to us when we talked a little too fast or used vocabulary they don’t quite understand, and then they translated our thoughts directly to the children. I was spoiled. I got to work with a terrific partner-coach who worked really hard, was hilarious, and speaks English much better than he even knows. He, and all the other coaches, made my experience something I will never forget.

Together, we knew that even a few nice words, along with a smile and a hug, can go a long way. Just letting the kids know that they’re doing great in class (tốt lắm) or letting a Vietnamese coach know that his or her English is really great, means a lot more on the receiving end than it does for the person saying it. This coach is smarter than he knows, and I hope that one day he gets rewarded for this.

These kids have changed me, something I thought they might never be able to know, because I don’t have the means of communication to tell them. BUT since we spent time going beyond the words and relying on emotion, compassion, and laughter, we made a connection that was likely stronger than words alone.  This was unexpected.  Who knew?  AND because our experience together was so real, it reaffirmed my knowledge that our actions do speak louder than words.  OR at least I learned mine do. 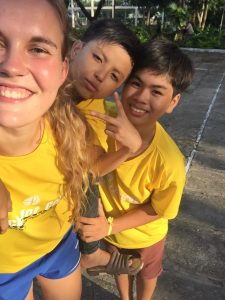