Last night was absolutely freezing so I made use of the electric blanket in my bed, as there is no central heating system here, even in winter. I’ve somehow skipped all phases of jet-lag thus far and have slept through the night straight from 10:30PM to 7:00AM. It feels wonderful to sleep. The rest of the group… not so lucky. They have trouble falling sleep, then wake up at 1AM for two hours, then sleep till 5AM. We’ve been getting in the habit of heading to the glass gazebo by the pond in the morning to read, chat, or play cards when we wake up early.

Ten student athletes, two days, and we have already cleaned out the house’s several-jar supply of peanut butter.

After breakfast we loaded up the vans and drove to a small monastery on the outskirts of town: Gyalthaag Ringha Monastery. Upon reaching the monastery, we drove around the outer wall in a clock-wise fashion (you have to circle everything clockwise). We parked and walked through the outer gates into the monastery. Tons of trees stitched together with prayer flags covered the hill. Stone steps led all the way to the top of the hill with golden prayer wheels lining the way. We climbed for a good five minutes, wheezing, heart pounding through our chests. The density of prayer flags increased the closer we got to the inner wall of the monastery. Once inside the wall, we walked around the temple wall clockwise. Layers and layers of multi-colored Tibetan prayer flags surrounded the temple, weaving back and forth between trees and walls. Various animals such as goats and chickens roamed the grounds. At the top of the hill while circling the temple we came across a large furnace burning incense. People were praying and prostrating themselves in their worship of Buddha. Others were stringing more prayer flags between trees. Incense smoke filled the air, adding a smoky haze between the flags. We needed to find a restroom but it was towards the end of the circle and we couldn’t back-track because we had to walk clock-wise. Circling around again and we found the squatty-potties. We then had to go around yet another time to reach three circles because you are supposed to end on an odd number. 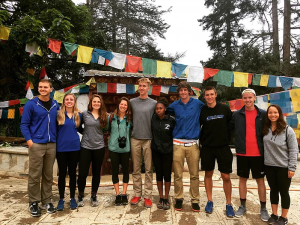 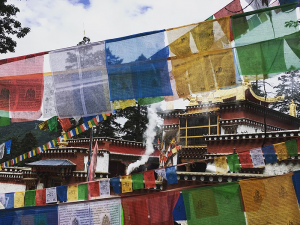 Back at the front we met a Buddhist monk in traditional attire: red robe and orange beanie-type hat. He asked where we were from, and we responded “America.” His face lit up, he tentatively looked around, then pulled down the front of his robe to reveal a Cleveland jersey underneath. “I love Kobe Bryant!” he exclaimed as he jumped around pretending to shoot a hoop. “Lebron James!” I was surprised by the globalization that I always know exists. But I guess coming here I had a very romanticized view of Tibet, Buddhism, and the life of monks – things I really know very little about. I also ponder why American culture has become so mainstream and at the heart of globalization that it reaches all the way across the globe to a small town monastery in Tibet.

After lunch we went on a hike through the village and up the mountain hopping a fence and wall into the botanical garden to a path that led up to this incredible structure on top of the hill. From the roof we could see the entire lake, wetlands, fields, and up into the valley with a beautiful panoramic view. On the way back we got soaked by the rain but so go adventures.

It’s been really fun working out with the group every day. It’s awesome how everyone is so athletic but in totally different areas of strengths.

I have never really learned much about Tibetan culture or Buddhism before so this is certainly a learning experience for me that causes me to think more deeply about the world around me.

One of my goals for this week was to try every single dish that is served at each meal, even if it’s just a little bite. I’m usually a picky eater and don’t usually like Chinese food, but I’ve bee pleasantly surprised. However, today I was put to the test. One of the dishes was fermented eggs… Slices of eggs were served on the plate, but these did not look like eggs at all. What was supposed to be the yolk was a dark green, blue, black color. And the egg white was a transparent purpleish-black transparent Jello texture. The dish made two rounds around the lazy susan before I got up the courage to squeeze a piece of fermented egg up with my chopsticks. It actually tasted pretty good, not my favorite, but oddly still tasted like an egg despite it’s revolting appearance. 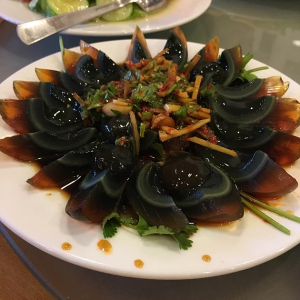 After dinner we discussed the Tibetan yak caravan movie we watched last night, especially talking about authenticity given a foreign director but with local villagers as the actors. We also watched a documentary on the sacred mountain, Kailash. In Tibetan Buddhism, people make a pilgrimage around the base of the mountain to accumulate merit. It’s 53 kilometers around, and some people walk it, other go the whole way continuously prostrating themselves on the ground, measuring the entire length with their bodies. This usually takes about 20 days. Every twelve years during the year of the horse, it’s a special pilgrimage. Apparently, one circle around the mountain during the year of the horse is worth thirteen circles. The more times you circle it, the more merit one supposedly gains. Tibetan Buddhism is very focused on forgetting the self, as one usually mainly prays for the universe and gains merit for the universe. But they are humble, and not competitive about merit. The more one forgets the self, the closer they are to enlightenment. Merit is different than Karma which has to do with ones supposed past lives. Merit is what you sow, karma is what you reap.

I have never really learned much about Tibetan culture or Buddhism before so this is certainly a learning experience for me that causes me to think more deeply about the world around me. On another note, I’m also learning Mandarin and a little Tibetan. We’ll be put to the ultimate test when we teach English and lead a sports camp with local children from the village later this week!