Before my journey to South Africa began I had one constant question on my mind, “What kind of impact will I have on the people and the community in South Africa?” I felt limited, since I only had three short weeks. After talking with a few of the other student-athletes on the trip, I realized that we all had similar concerns, which was comforting but also worrying. Going into our three-week adventure, I thought that the most significant impact I would have on the township would be the greenhouse construction project planned for the last week of the trip. I viewed this as a tangible structure that people in the community would be able to recognize and remember our team by. I did not realize that this project was very aggressive in scope and we would only be able to complete the foundation of the structure and part of the walls, but this gives a good start for future teams working in the township.

“I knew I couldn’t change everything, but I realized that sometimes the smallest things can make the biggest impact.”

Every night before I went to bed, I would pull out my journal to record my thoughts and experiences I had throughout the day. I mainly reflected on the conversations I had with the children in the sports camp and the ladies in the women’s empowerment program. I wondered if I was truly making a positive difference in their lives just by talking and listening to them. On top of journaling, I also had an application on my phone that gave me a quote to think about for the day. One of these quotes, from Maya Angelou, completely changed my outlook. It said, “I’ve learned that people will forget what you said, people will forget what you did, but people will never forget how you made them feel.”

I read over the quote a few more times. It had finally clicked that this is how I would leave my mark in South Africa. I started to approach each day with the mindset that I wanted the people that I encountered to feel cared for and important. After a few days with this mindset, I started to feel like I was making small differences. I knew I couldn’t change everything, but I realized that sometimes the smallest things can make the biggest impact. 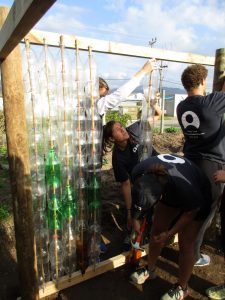 One moment that captured this idea came on the last day of our construction project. I was very disheartened when I came to the realization that we wouldn’t be able to finish the greenhouse. We had only a few days and limited hand tools, but our team thought we would overcome these adversities. We were all on our lunch break discussing how we were allocating tasks and jobs for the few construction hours remaining when I heard someone calling my name. I recognized the voice. It was coming from one of the boys in the sports camp who I had befriended. He was standing right outside the gate of the school waiting for me. I remember thinking – “why was he asking for me?” As I approached the fence, his face lit up and I could not keep from smiling in return. In that moment, I realized that I had succeeded in my mission of connecting with the people in the Nomzamo township. I will never forget this special friendship and the impact he had on me.