The three weeks that our ACE team spent exploring and coaching in South Africa flew by.  During our first two weeks, we coached children in Nomzamo Township near Gordon’s Bay. During our final week, we volunteered at a women’s empowerment program in the community center of Nomzamo and also began construction on a greenhouse made of recycled materials. I thoroughly enjoyed working with these children, women, (and construction materials), but I also loved hearing from our many guest speakers throughout the trip.  When initially arriving in Cape Town, we had seemingly endless questions and queries about the country, the economic disparities in such close proximities, the vast and complex history of the nation, the relationships between each culture in South Africa, et cetera.  Had we not had the opportunity to listen to these South African speakers, we would have left the country with questions partially answered, and even questions unasked at all. To be blunt, our understanding of South Africa and of the “rainbow nation” would definitely have been abridged.

We had the opportunity to listen to a native Xhosa-speaker, MC, speak about cultural and tribal practices of the Xhosa near Cape Town, including views on marital roles, religion, certain rites of passage and initiations, and even views on abortion and various forms of contraception.  He answered all of our prodding questions candidly, and we left the session feeling more enlightened and educated about the teachers and children with whom we were interacting with at the sports camp in the township.  We began to understand and appreciate the children’s varying views, and recognize certain signs of initiation like the amputation of the pinkie finger or the tying of a rope around a boy’s waist for religious purposes. Although none of us are experts on these practices, it was so neat to learn from MC about some of the more discernible distinctions within the Xhosa culture. 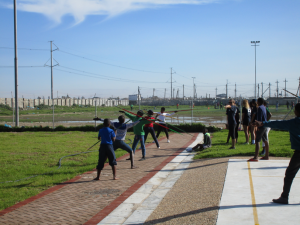 On another night, we ate dinner with Dr. James T. Campbell of Stanford University. He has a wide array of knowledge about the long history of South Africa. He is even knowledgeable about the unwritten histories of tribal South Africa pre-colonization.  It was incredibly interesting to learn more about the economic origins of apartheid as well as the obvious racist ones. We learned that it was the discovery of diamonds, and later coal, in the Highveld that began apartheid or literally “separateness” systems.  Apparently, the coal found in these areas was of a lower grade, and was therefore more difficult to mine and make a profit.  The government’s solution was to employ black men and pay them a fraction of what white men would agree to work for. Black men would consent to work at such a low wage purely to send their profits back to their families, who were starving in the infertile “tribal homelands” where the government forced them to live.  As the years passed, apartheid laws separating and disadvantaging black and “coloured” people extended and intensified.  I could go on and on about what Dr. Campbell taught us about apartheid, the many resistance movements over the decades, and the accounts of life in townships during this time, but I would be writing forever! I know that we are all so glad to have had the opportunity to speak with him and rattle off our many questions about the country’s long history. 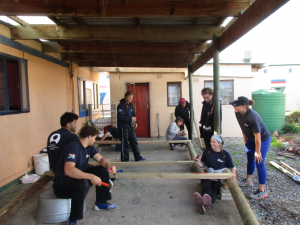 All ten of us are so lucky to have spent three weeks in an unbelievably beautiful country that is diverse in countless ways.  We had a blast learning from the township children during the sports camp, who reminded us to seize every opportunity and not to take anything for granted. We loved having the chance to help women in the township with computer and interview skills, who will now apply for jobs and one day might even start their own businesses.  We definitely learned the meaning of blood, sweat, and tears as we built the greenhouse from scratch. From, leveling the ground, cleaning and cutting soda bottles, measuring and chiseling wooden planks, and finally cementing the frame into holes in the earth, we worked hard on the small gift we left.

The guests who spoke to us, including MC and Dr. Campbell, helped us understand both the people with whom we worked and understand a little bit more about South Africa as a whole. 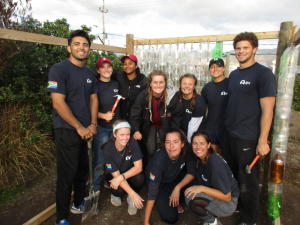