Even though three weeks is a relatively short period of time for anyone to completely understand a foreign culture, I feel like I’ve gained lots of newfound knowledge from my time in New Delhi. There was a lesson to be learned every day. Some of the lessons I learned definitely stand out more than others, and here are few:

1. Culture
Upon arriving in India, I definitely experienced some culture shock, as is to be expected when visiting any foreign country. I also think it’s safe to say the Indian culture differs from what I am accustomed to in the United States in several ways. It took some time to adjust to; however, Indian culture is one-of-a-kind. From celebrating different festivities almost every week, to reciting religious mantras before every meal, it’s a culture that values and greatly emphasizes arts and traditions. Although the culture appeared different to me initially, the differences are important. Cultural differences are what make each culture unique. Without cultural difference, there would be no diversity in the world, and no room for learning from others.

2. Value of Education
From working at the D.A.V. Public School, I noticed that most, if not all, of the students had a natural eagerness to learn. The teachers always had their attention, full participation, and most importantly, their respect. Similarly, with Butterflies, a non-profit organization that teaches life skills to vulnerable and working children, I observed the importance that the children themselves placed on education. The organization runs a program called “Mobile Education,” where basically a mobile school drives to a “contact point” where children voluntarily meet for extra help in school and tutoring. Despite the majority of these children being first generation learners, they all shared a long-lasting thirst for knowledge. Because of D.A.V. and Butterflies, I can only hope to be as passionate about learning as they are, instead of seeing it as a mere chore that needs to be completed.

3. Perspective
Perspective is another important concept that I’ve learned more about while in India. How I perceive something is completely different from someone else, and that’s due to the fact that family, society, and personal experiences play important roles in shaping one’s way of thinking. Many of my initial thoughts that first came to mind when walking around the streets of Jasola are relative. To me, seeing wild cows roam the streets was very unusual, but to the locals, that’s a regular occurrence. The definition of “traffic” would also differ between the United States and India. Money is also relative. The exchange rate of $1 is about Rs68 (Rupees) and when bargaining at a market, one merchant made a point that I hadn’t thought about. He said, “What difference does Rs100 do for you?” and he was completely right. We were talking about a $2 difference, which for me is pretty insignificant, but Rs100 in India could cover an entire meal. From these experiences, the expression of trying to “take a walk in someone else’s shoes” has never seemed so relevant because many of the things I typically take for granted are not accessible to others.

It’s truly amazing how much I’ve learned from such a short time in India. I feel like I have a deeper understanding of many things because of it. This experience has allowed me to develop more as an individual, and I’m extremely grateful. If an opportunity like this one were to ever arise again, I would do it in a heartbeat, as the lessons I learned from this program are ones that I’ll never forget. 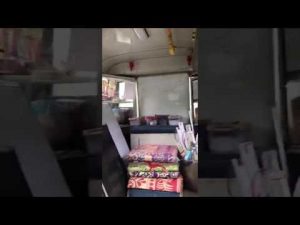 The inside of the Mobile Education bus is filled with books and other school supplies for the children of Butterflies. To view the video tour of the inside of bus visit: https://www.youtube.com/watch?v=O9aQISni8Xs