With just about a week left in Vietnam, I’ve started to realize some cultural differences I never would have expected. First of all, the Vietnamese coaches all said that the Americans are too polite at the dinner table (to which I responded, my mom doesn’t think so!). It is common in Vietnamese culture to just reach across the table to grab whatever you want from any plate of food that sits on the table, no need to pass all the food around the table. I feel like this will get easier when my chopsticks skills improve and I can stop stabbing the watermelon and eating it like a kabob.

Secondly, I’ve noticed the weather is pretty much unpredictable. I’ve had a few days in a row now where I’ve spent an hour or so hand washing all my laundry then putting it out on the line to dry in the sun to just have it pour all morning. Let’s just say I’ve gotten pretty good at hand washing my laundry in a bucket and a little too used to wearing damp clothes!

One of the more prominent differences I’ve noticed takes place in the classroom. There is little interaction between boys and girls. On the very first day of camp, the boys sat on one side of the classroom and the girls on the other. This is true on the sports fields, too. When asked to make 2 lines for a soccer drill, the lines almost always consist of all boys in one and girls in the other. A couple of the American coaches were reflecting on this dilemma saying how it was just never a problem for us, we were always told to sit boy-girl-boy-girl in the classroom so we wouldn’t talk to our friends too much, and even that couldn’t keep us quiet. We just kept making new friends. Some of the children are so shy that they won’t even say their name out loud in a circle when playing a name game.

This got me thinking- what really is the difference in schooling that created this sort of shyness? After a little bit of googling and talking with Vietnamese coaches, I’ve found that average class sizes in elementary schools are quite large (averaging about 40 students per class). Therefore, students are taught from their first day not to ask many questions and to think of their teachers as the “fountain of knowledge” and that students should do all they can to learn everything the teacher says and not ask many questions. So this is starting to make sense to me. The kids look at me and the other teachers as the ones who control their success. My goal for the end of this camp is to show the kids that it isn’t the teachers or anyone else who controls their success, it is each and every one of them who controls their own success in life. They are just as smart as every one of their classmates, some may have to work a little harder to see the same successes.

A similar overwhelming shyness overtakes the girls outside the classroom as well. During the sports lesson, the boys are almost always the first ones to volunteer to shoot the ball or to help be an example of how to pass the soccer ball, and most girls are just too timid to participate until they have to. But it seems like this ends once the school bell rings. The girls stick to their best friends and laugh and play and head on home. It’s really crazy to me to see the almost instant change in the attitudes of the children when they’re in a school-like environment (even when this is just camp). It seems like at school they’re only there to learn and listen to the teacher, no nonsense. It has been hard for me, as an American coach, to change my own teaching techniques to respect their culture.

Despite this, I have noticed that Vietnamese children, even at this age, understand the extreme value of an

education. They know that without an education they probably won’t be as successful as they want to be. This puts them ahead of children from other nations because they understand why they’re in class. Education provides value to them, rather than just being something the kids are forced to do.

One day last week , I decided to spice it up a little. I brought in a little prize for the students. I gave one pair of sunglasses to each kid when they answered a question right and they could not have been happier. 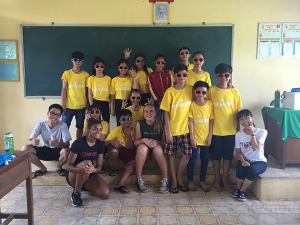