Jacie: It was around 5:30pm and Veronica and I were on our usual run: down the driveway (avoiding a multitude of cows, yaks, and yak poop), through the local village, around the lake, and back. We were in the last half-mile of the run, our legs moving in synchronization, our heart rates up. I was very “in the zone,” completely lost in the rhythm of our strides, the scenery, and my music.  So when V suddenly stopped and grabbed my arm, I was totally taken aback. She must have dropped her phone…

Veronica: I heard a scream coming from behind us and turned around to see Pat, one of the six year-old boys from camp, excitedly chasing us down the street! I grabbed Jacie, and we ran towards him. Pat and I had spent a good amount of time together over the previous few days, so we had taken a picture together on one of the girl’s Polaroid cameras. When we reached him, Pat was holding the picture of the two of us in his hand. After we met up with him, two of the other children from camp came running out along with two girls that we hadn’t met before.

Jacie: PAT!!! One of the youngest, and most smiley kids from camp was waving at us frantically from across the street. We turned around and headed towards him and the other kids he was with, just as excited to see them as they were to see us. “Hi Pat! Hi Katrina! Hi Luke!” We waved at them and squatted low enough to give them all hugs. Neither V or I can speak Tibetan or Mandarin, so we relied mainly on body language to communicate with the kids. I pointed to myself and her and said, “We were running,” while simultaneously jogging in place to show them what I meant. They pointed to themselves, jumping up and down and nodding their heads excitedly. Confused, I said it again, “No, V and I were running.” I gestured to the two of us. Again, the kids started pointing to themselves excitedly. Then Luke, one of the younger boys from camp, got in a three-point position. I started to smile. “V, I think they want to run sprints with us.”

Veronica: Jacie explained to the kids that we were on a run, and they decided they wanted to race. Immediately they all lined up and got in their starting positions, urging us to come join them on the imaginary starting line. “Ready, set, go!,” and we were all off charging down the street. Watching from the back of the pack, even the kids that weren’t winning were just enjoying being able to run with everyone. The kids gave it their all, panting at the finish. They were completely out of breath both from running and from laughing the entire time. We ended up racing at least five times, each time finishing just to have everyone hurriedly line up again.

Jacie: The kids were competitive, just like us. Pat was the head of the pack despite being the smallest and the youngest. Luke was never far behind, and the one time he beat all of us he wouldn’t let us forget. They ran in sandals, in old sneakers, in whatever clothes they happened to be wearing. They were all smiling and laughing, and V and I were smiling and laughing with them. Exhausted from all of the running but filled with life from all the contagious energy around us, Veronica and I said our goodbyes, and turned to continue our run back to the CERS center.

Veronica: The last part of the run was typically the worst part since the road was entirely uphill, and we were always exhausted by the time we started going up. As we were running, we looked back to wave at the kids, and Katrina, Luke, and Pat flew by us. They wanted to keep running. We kept telling them that we were going all the way back to the center (more than half a mile from where we were), but they persisted and kept jogging along with us. We all ran together for over a quarter mile before they finally decided to part ways. We gave one final goodbye and waved as we ran off.

Jacie: Running with this group of kids highlights some of the best and most rewarding parts of this experience. Veronica was my roommate for the trip, and she has motivated me in so many ways. From her knowledge and passion for neurobiology to her insane ability to control her pace and breathing during long runs, V has taught me so much. I’m so thankful to have gotten to know her on this program. The run we described above was just one of the many runs we took together, morning or afternoon, regardless of whether it was sunny outside or pouring rain. But this particular run was so incredibly special because it gave us confirmation that the kids we had just spent the last couple of weeks with really, truly cared. They remembered our names. They were pointing out the colors we had taught them: green grass, blue necklace, pink shirt. They wanted to share their new knowledge with us, and more than that, they wanted to share the experience of running. Having them initiate that interaction and that activity is something I will remember forever.

Veronica: Looking back on this moment, I would consider it to be the highlight of my time in Shangri-La. After finishing the camp, I was feeling a bit insufficient. I wasn’t sure that anything we had done with the children was actually going to have a lasting impact on them. However, this moment changed my perception of what we had shared. Throughout the camp, Pat and I had worked on learning colors just about every day. He would typically have them down for a bit, but then forget them again by the next day. After one of our races though, Pat ran up to me and showed me his blue necklace while yelling out “BLUE! BLUE!” He then did the same with his yellow medal. During this he had the biggest grin on his face, and I could tell he was so excited that he was able to identify the colors correctly. While this may seem insignificant, I think it makes a bigger point of what we were trying to accomplish through this camp. We were simply trying to get the kids excited about learning and being active, and this moment showed that we accomplished both of these. Being able to witness this through sharing the sport I love with my newfound friend just made it that much more special.

Thank you ACE for allowing us to experience so deeply such an incredible part of the world, for enabling us to forge friendships with people we would not have met otherwise, and finally, for letting us find our new running buddies. 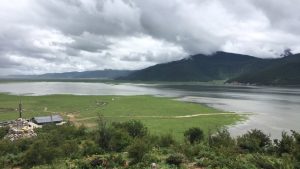 The landscape of our daily run.