This Saturday, we went to the Mother Teresa Sisters of Charity Shelter in Delhi as a group. After spending two hours with the residents, it’s safe to say that we were all deeply affected by not only their living conditions, but more importantly their demeanor and approach to what would be considered extremely challenging by most outsiders. We both had different experiences and observations about our time, but at their core they are fundamentally the same: No matter where you are, humans have the same desires, to find happiness, and be loved, and feel wanted.

While the female ACE volunteers worked with the female residents, Jake, Michael, and I joined the male residents for lunch. After sitting quietly for a half hour, I walked out of the mess hall, and sat down next to an older gentleman.

“Which country?” he asked loudly, but surprisingly clearly.

“America. Aapka naam?” I asked, feeling so proud that I used the only Hindi that I know, even if it was just a broken manner of asking his name.

“Omprakash,” he responded, gesturing to his walker, where the word was written on a sticker.

I paused, wondering is his name was actually Omprakash, or if he had just adopted that name based on the sticker. Prior to visiting with the residents, our host warned us that many of them did not know their given names, and that they simply gave themselves new names. I thought briefly about my own name. About how I don’t like when people call me “Pat” unless it’s my sister or my grandma. I had never thought about not having a name before. I was suddenly struck by a wave of sadness. 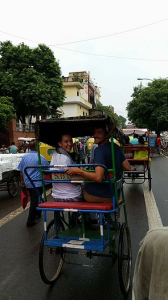 The right move was to advance the conversation. “You have a newspaper in your pocket. Do you read?” I asked, almost offensively, slowly and clearly.

“Yes, I read so many books,” Omprakash answered again very loudly. At this point I was paying attention to his manner of speaking. He only had the back half of his tongue so he spoke with no sharpness to his words, and strain in his voice. Imagine talking while biting your tongue; that’s what he sounded like.

He asked me to read to him, so for the next 20 minutes I read to Omprakash about the Prime Minister’s stance on cow vigilantism, which is evidently a hot button topic in Delhi. It was topic that would be a satirical article in the U.S. – people assaulting other people over cows, stunting the growth of the meat industry to the point that the country’s leader had to release an official statement in opposition of these activists.

I read Omprakash two more articles before I finally went back to just asking him questions. “How long have you lived here?”

“I am living in heaven,” he strained to say, then shot me one of the happiest smiles I have ever seen.

I didn’t answer. I didn’t know what to say. A man who may or may not have gotten his name off of a sticker, who has half a tongue, and who, I had been told, was abandoned by his family, just told me that he is in heaven.

Earlier in the day I had dropped an F-bomb because my laundry hadn’t come back as quickly as I wanted it to.

I thought about those two things in parallel for a second, then a second wave of sadness hit me. This time a lot harder, like a linebacker, or a big car, or a train, or a bomb, but, more accurately, like all of the things I have ever not appreciated fully. Then I put my head down and started to cry.

I wasn’t sure if I was crying because his life made me sad or because my life made me sad, or maybe both, but regardless I was crying in front of a total stranger, a very friendly and enlightening stranger, but a stranger nonetheless. I cried for a couple minutes, but then I realized I hadn’t said anything in a while, so I went back to the newspaper and read my new friend another story, understanding that I had no idea what else to say.

After the third story, Omprakash asked if I wanted to see his book collection.

So, he led me slowly to his room, then took out book after book from his cabinet. First was Gulliver’s Travels, then The God in Small Things, then The Tipping Point by Malcolm Gladwell, then Da Vinci Code. Book after book inscribed to Omprakash from a different visitor. He told me he had read them all, always speaking loudly, and struggling to enunciate.

I was blown away. This man was so happy with the small amount he had. So, so happy. It was amazing.

All of that to say that it is incredible the volume of things that I take for granted. Omprakash felt to me like an embodiment of my entire experience in India up to this point. So many people here have so little, but are so happy. There is so much to be learned from our time in India, but after our time with the Sisters of Charity, I feel strongly that the most important lesson is to appreciate what you have, and find joy even in the smallest things.

This past Saturday our group traveled to Mother Teresa’s Sisters of Charity House. This NGO focuses on serving mentally, physically and emotionally disabled members in New Delhi’s community. Surrounded by huge red gates sits the house which caters to this community.

We walked around the complex and peered into a room with 30 cots, resembling that of a homeless shelter. We left the communal bedroom and were immediately met by a women who embraced each volunteer. The pure act of being squeezed on the shoulder prompted me with an understanding of the cruel reality I was about to face.

“Humans have a desire to be love and to be accepted. People are people. We desire to have companionship and to share connections with others.” – Maria

We desire to have companionship and to share connections with others.
The female volunteers walked into a room full of 15 women. The women ranged from ages 65 and up. We went around shaking hands and offering reassuring smiles. After saying hello to all the women, I headed to the back left corner of the room where a woman in yellow dress sat. I noticed that she was sitting alone and wasn’t making a sound. As I extended my hand to say hello, I realized she was blind. Her eyes were completely shut; eyelashes appearing as if they were glued together. She made no movements, but once I grabbed her hand her face beamed with a smile. Over the next two hours I massaged her hands with lotion, painted her nails and fed her. The most challenging aspect was understanding how to communicate. I had make calls based off her body language and figure out what she needed. The only feedback I could go off of was a simple hand squeeze back or a smile. My mission throughout my time there was to see that smile and to make her feel important.

I left the Sisters of Charity House struggling to grasp the reality that certain people are dealt with such hardships. I left feeling uncertain why some hardships which are so limiting are placed on some people, yet not others. However, I came to the realization that the thing that made this women happiest was pure human touch. Simple human interaction. Humans have a desire to be love and to be accepted. People are people. We desire to have companionship and to share connections with others.

Mother Teresa’s Sisters of Charity House and my stay in India are continuing to provide me the understanding that at our core, we are all the same.