Despite being in a foreign country where we are faced with language barriers and constant stares, what has made me feel most like a foreigner here in Shangri-La are the animals. At home (in Colorado) I tend to make fun of tourists taking pictures of the animal life around my area of town because of how abundant it is. Yet here I am, being “that tourist” and taking pictures of every yak, cow, goat, and chicken I see.

I was thinking about it and realized that everyone must find it amusing when we take pictures of animals that are so common and ordinary here. At home, deer are basically larger rodents that are sometimes cute, sometimes annoying. I figured the sheep and cows that I see on all the streets here must be the equivalent to people of this area.

However, I have come to realize that this isn’t the case at all. Whereas animals on the side of the street at home are just that, the animals here seem to carry a much greater significance. Each animal seems to have a purpose and provide a cultural insight into a unique way of life. 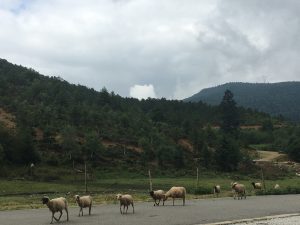 For instance, when visiting a mountain that has been declared sacred to the area, a flock of sheep walked by that all had red strings and tassels hanging from their ears. These signified that these sheep had been freed. This meant that they were not to be harmed or captured because they belonged to the sacred mountain. I found this to be intriguing because in my experience, animals never seem to be commonly thought of as sacred or worth protecting unless they are considered to be endangered or at risk. At home, a herd of livestock would likely never carry any religious or cultural significance.

Not only that, but each day, when I’m running, I pass several herds of cows. They aren’t in pastures, but rather just lounging in the streets. Deer tend to do the same in my neighborhood, but everyone typically just views them as mobile roadblocks. To the people of Shangri-La, these cows are their livelihoods. Due to the elevation of the areas on and around the Tibetan plateau, people of this region have traditionally been nomads instead of farmers, using yaks and cows to support their lifestyles. The cows in the streets show the continuation of this way of life in the area as they are still being used for the same purpose. 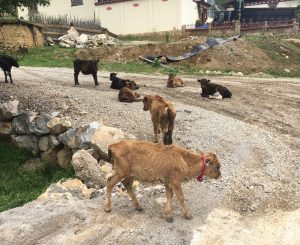 I’ve found it fascinating to see such a broad and communal sense of respect and appreciation for animals that are so common. Animals don’t need to be in a zoo or at risk to be considered significant. Animals have significance, whether it be religiously or culturally, rather than just being a nuisance or thing that can be fun to look at.