On Thursday afternoon, with the guidance of Mono Singh, our ACE group visited three different religious sites in Delhi. We visited a Hindu temple, a Muslim mosque and a Sikh Temple, representative of the three most predominant religions in India. At each religious location we were learned about the history of these three dominant faiths and specifically how they coexist and intermingle with one another within the borders of India.

Our final stop at the Sikh temple was particularly meaningful in its juxtaposition to the two previous sites. As compared to Hinduism and Islam, we learned that the Sikh religion is centered on a value system that aims to protect and provide for others. Mono explained that their philosophy is to offer selfless service and dedicate themselves to social justice. 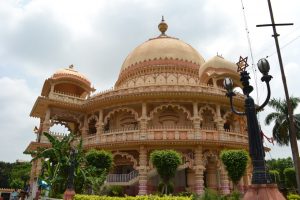 At the Sikh temple we not only had the opportunity to observe their religious prayer within the temple, but we had access to their entire complex, including their on-site kitchen. The kitchen was lively with huge cauldrons cooking soups and giant griddles frying naan and chapatti. We learned that this enormous operation is open daily, serving food and tea as well as providing shelter and refuge to thousands of people every day. 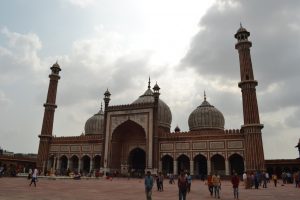 Our visit to this temple delivered a culmination of culture as food, music and religion combined in a single location to create an atmosphere of hospitality and security. The Sikh religion was originally founded on the principle of peacekeeping. Their history is specifically marked by their thwarting of the hostility and violence that ensued between the Hindu and Muslim communities in India. Their current attitude mirrors this foundational work.

It was inspiring to experience the set of values that Mono had described to us in action. These individuals were truly practicing what they preach. As student-athletes, our value system is similar in that we are focused and dependent on notions of teamwork and responsibility. While in India each of us has come from a distinct upbringing, sport, and school. Over the past two weeks, we have come together as a single team to carry out ACE’s mission of outreach.

Experiencing three representations of tenets within India reminded us that a multitude of backgrounds can funnel into a singular goal — community.

Of course there will be differences between a student-athlete experience at Duke compared to one at Stanford, but at the core there are the same tenets. We all take it upon ourselves to act as pillars in the global community in order to represent our schools, athletic programs, coaches, parents, and ourselves. Experiencing three representations of tenets within India reminded us that a multitude of backgrounds can funnel into a singular goal — community.

Love, service, and many other qualities that religion emphasizes unites people just as ten student-athletes were united for a purpose, to craft ourselves as global citizens and serve as a link in a chain of change.