With camp unfortunately coming to a close today, we both came to the realization that while we had been occupying the role of “teacher,” the process of learning ended up being a two-way street. The kids helped us learn more about ourselves as Duke/Stanford student-athletes and made us grow closer to one another through all the planning and hands-on activities that we enjoyed on a daily basis.

Once we had a few days of camp under our belt and got comfortable with the environment, we found that each of us had our own unique teaching style and, when we played to our strengths, it made for a very smooth and successful camp. Most ACE members gravitated toward working with a set of kids that best aligned with their personality and teaching style. Both of us enjoyed working with the older boys and engaging in more physical activities. We found that in order to keep things moving forward, while also prioritizing the children’s enjoyment of the activities, we had to balance maintaining order and practicing patience. We wanted the children to have fun and to learn, but often the environment could quickly become chaotic if we didn’t have the foresight to intervene before things got out of hand. Brandon and I often didn’t see eye to eye (mainly due to the 7” height differential), but we found a way to make a great team. I (Riley) would often need to interject or call the kids to attention, while Brandon would patiently attend to any outliers who were slow to respond.

As the kids became more comfortable with us and the flow of camp, some of the older boys started acting aggressively and revealed their extremely competitive nature. This is something both of us can relate to. Luckily, I (Brandon) was able to provide the same outlet for them that I utilize myself—wrestling. With a roll of duct tape and all the cushions, bedding, and yoga mats I could find, I constructed a makeshift wrestling mat. The first day it was revealed, it was an instant hit. The boys could finally channel their aggression safely through sport. Their safety is a major priority, so we made sure to lay out the guidelines from the beginning. Everyone listened and responded well as we described the importance of not punching, kicking, or intentionally hurting each other. 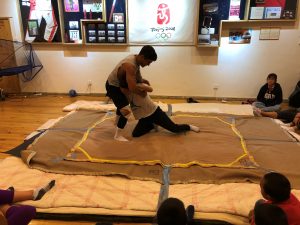 Soon it became such an exciting event that everyone wanted a turn to step on the mat. Girls, boys, and even ACE members went head-to-head, pushing each other out of the circle and vying for takedowns. One of the core principles in wrestling is honor and respect for your opponent. This was important to get across to the kids, so at the beginning and end of each match, we had the kids shake hands no matter who won or lost. They followed this very well and soon became absolutely insistent on going up to wrestle again. The older boys would ask us nonstop throughout each day when it would be time for wrestling. If they felt like it wasn’t soon enough, they would grab for my (Brandon’s) phone and asked to watch videos of me wrestling. Throughout the camp, I taught them new moves and demonstrated different techniques with Riley. It felt incredible for me to be able to share my passion for the sport and positively influence these young boys. I (Riley) also had a blast learning a new sport and flying through the air as Brandon easily tossed me around. Learning the sport alongside the kids was an absolute pleasure. 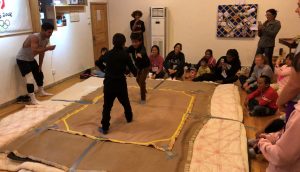 From the moment we met each other on the plane ride from San Francisco to Hong Kong we immediately connected and have since only grown closer. We have lived together now for a fortnight, sharing a room, exploring an entirely new landscape, and learning immensely about a unique culture. These have been some of the most enlightening and exciting experiences of our lives, and the moments shared with the children here have complemented, contextualized, and heightened them all. Balancing our teaching styles and supporting each other through difficult moments with the children has strengthened our friendship—one that we know will last far beyond our time in China. 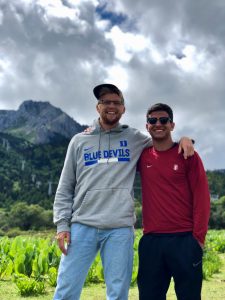