We have just finished our second week here in South Africa! The theme of this week’s blog post is about collaboration and more specifically ACE’s unique Duke-Stanford collaboration. We (Jaisel and myself) agree that one of the most attractive aspects of the ACE program is this collaboration between universities. Both Duke and Stanford are top tier universities in academics and athletics; thus, this program presented us with the opportunity to build relationships with high level student-athletes from opposite sides of the country and learn from one another while simultaneously serving with community partners abroad.

Jaisel and I struggled to discern any specific differences between the Duke and Stanford participants, but rather agreed that as student-athletes we all are very comfortable working together towards a common goal. Since the students from the school are on winter break, we spent this week working at Mama Lumka’s children’s sanctuary. At the sanctuary, we were tasked with several projects for the week. One task was building a market stand for Mama Lumka, so that she can sell vegetables from her garden and spare clothing. A second task given to us was to paint a children’s room. Both Jaisel and myself chose to work on the market stand, as we aren’t exactly artistically gifted. After building the original design, we identified several ways in which we could improve the structural integrity of the market stand, and continued to modify the design until it was very sturdy. I was very impressed with how well everyone worked together and seamlessly divided the work amongst ourselves, with several people cutting PVC and other sanding and assembling the structure. 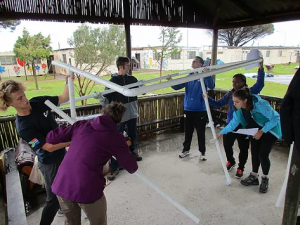 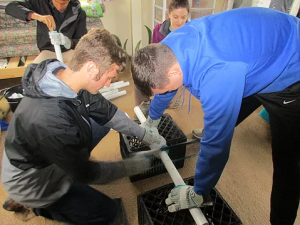 Later in week, following the construction of the market stand, we laid cement foundations for three new “Jo-Jo’s” that collect water for the garden. Similar to the market stand, we divided the work that needed to be done and completed the project with ample time to spare, since we needed to lay the concrete before the rain came on Friday.

The best part of the week, however, was not the construction projects, but rather spending our lunch breaks playing with the children at the sanctuary. Each morning we were greeted with screaming children, “Teacher! Teacher!” It was extremely enjoyable getting to know the children over the past week and being able to make lasting contributions to the sanctuary.

Thank you all for reading this week’s blog post!