Wong How Man is an explorer. Ever since his early years in Hong Kong, he’s been tapping into what he calls a universal sense of wonder and curiosity. You could say it all started with a bike, on which he wandered into virtually every crevice and corner of that historic island in his teens. After studying at the University of Wisconsin, a world away from the urban, fast-paced hub where he grew up, he returned to China as a photographer for The National Geographic, making quite the name for himself after documenting the true source of the Yangtze River. It was a months-long expedition following one of the lifebloods of China from its immense spout to a small, murky spring in Tibet.

After several other monumental expeditions to river sources in China, How Man founded CERS, the China Exploration and Research Society, turning his focus more towards preservation of culture and wildlife. We had the privilege of working alongside such a Chinese namesake at his headquarters in Gong Bin, a rural village near Zhongdian, Yunnan, known for its free-roaming yaks, delicious Matsutaki mushrooms, traditional Tibetan architecture, and strange sense of wonder it instills in all who visit. It’s impossible to tame your curiosity.

One moment from my weeks at CERS sticks with me more than most. After an evening documentary screening, How Man recounts us of his history up to the creation of CERS, and in the midst of a captivating story, he drops this wisdom bomb: “Don’t be afraid of getting lost.” It was a caution to avoid a comfort that bounds us to the known, a cage that tames our natural tendency to explore and adventure, to better understand the world and ourselves. Without the fear of getting physically lost, we can lose ourselves in curiosity.

Looking back, the most valuable parts of this experience happened when I was lost …

“In fact, getting lost has been the best way to understand new people and surroundings, to empathize with those from ostensibly different worlds (but truly not all that different), to appreciate the almost untouched beauty of Yunnan’s protected regions, and to ultimately find more of myself within it all.”

Lost in a new culture, one I knew nothing about. I came to China with a vague idea of a singular society from what I’d learned in the classroom, but soon started to peel away at endless layers to China’s many stories starting with Tibetan culture, one of 55 ethnic minorities, each with a unique narrative. 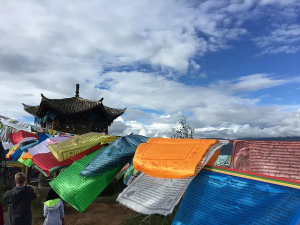 Lost in a game of tigers and yaks (a relative of sharks and minnows, but more suitable to Zhondian). I felt like a kid again running back on forth with our students from the village, dodging tenacious tigers by the skin of my teeth and realizing that playtime is a universal and timeless activity.

Lost on a beautiful hike in the local mountains near Napahai Wetland where villagers forage mushrooms and pigs roams freely during the summer months. The path less taken was always our first option, motivated by our new status as official “China Explorers” proudly touted on our CERS hats.

Lost in a conversation with Tsering Drolma and Dr. Bill about the black-necked crane’s significance in Tibetan culture and its recent concerning decline in numbers. Thankfully, the CERS team successfully pioneered initiatives to halt that decline, and now those celebrated creatures flock to the teeming wetland every winter.

Lost within myself, exploring feelings I’ve never felt before, like the new sense of adventure and spontaneity exploring old-town Shangri-la, or the renewed gratitude and empathy after working on the farm, putting ourselves in the shoes of people who depend on an unpredictably difficult labor for their livelihood.

In fact, getting lost has been the best way to understand new people and surroundings, to empathize with those from ostensibly different worlds (but truly not all that different), to appreciate the almost untouched beauty of Yunnan’s protected regions, and to ultimately find more of myself within it all.

That auspicious voice still whispers as my journey in China comes to an end and a new one begins—get lost. And my new path unfolds, not as I follow the precedent, but as I carve my own through the thickness of possibility.