When I’m bored in class, I normally draw a cartoon character named “brain-man.” He’s essentially a brain with a body, and I usually draw him doing something, like jumping rope. Two days ago at the Vidya School (the school where we are volunteering) Meagan and I sat in on a science class, which we did not realize would be taught in Hindi. The only information that I was able to understand was the the topic was environmental change. Within five minutes of not comprehending what was being said, I reverted to drawing brain-man, falling back into the self entertainment that has gotten me through so many classes. 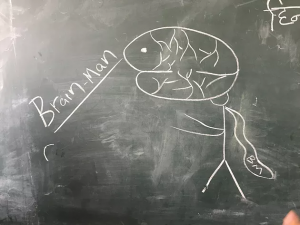 After finishing my doodle, I looked over to the two boys sitting next to me. The first boy had copied my picture, and the second boy flashed me a thumbs up and said, “You are very good at drawing brain-man, Sir!” The teacher shushed him and shot the other boy a stern look. I immediately knew that I was being irresponsible, distracting them in class, but more importantly I realized that these boys were just like me in sixth grade. Not paying attention doesn’t mean that they are bad students, or don’t care about school; it’s just that they want to laugh and have fun.

“So far the best thing about working at the Vidya School has been realizing that a kid is a kid no matter where you are in the world.”

So far the best thing about working at the Vidya School has been realizing that a kid is a kid no matter where you are in the world. The fact that there is a dump next to Vidya, and hundreds of flies in each classroom, and that it’s always uncomfortably hot, does not change that every kid just wants to laugh. Distracting students is the opposite of our purpose in these classes, but I still took so much joy from knowing that, as different as our lives are, I could bond with those two students over just wanting to goof around.