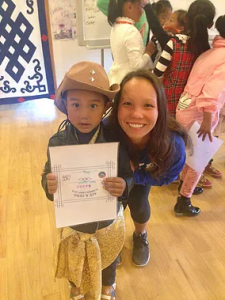 Throughout the camp, we saw a lot of improvements among the students. However, one camper that stood out a lot was a girl named Gina. Gina was the epitome of girl power: strong, sassy, and passionate. With her sense of power also came stubbornness, and her desire to beat every boy at everything, which came out a lot when we played sports together. At the beginning of camp, no matter the margin or the game, Gina would always find a reason why the other team was cheating. One of our goals of camp was to provide a fun environment where kids could be competitive but also happy no matter the outcome. Gina clearly was not happy when her team lost. Despite this characteristic, we all saw potential in her competitive attitude and desire to succeed. We praised the campers no matter how they did and showed enthusiasm to those who were the most positive and happy. After multiple games, Gina started to realize that the camp was for fun and she didn’t have to be winning the game to be having a good time. Even though she didn’t beat the boys in a relay race, she found her niche in jump rope and excelled in English. By the end of camp, Gina was constantly smiling and was a main leader on her team, always cheering others on and setting an example for her teammates.

Meet Kim. An adorable and soft spoken Tibetan girl in jeans, a pink jacket, and missing her front two teeth. On the first day of camp, she would barely whisper her name as we coaxed it out of her. Coming back in the afternoon and playing some games, a new side of Kim emerged with an excited smile and an extremely competitive side as she ran back and forth writing numbers on the board during white board races. Seeing Kim progress and become so much more confident throughout the week, both in English and sports, was an incredibly rewarding experience. By the end of the week she confidently would introduce herself in front of the whole class and dawned an intense and fun-loving competitiveness in every game. Seeing Kim grow and open up as the week went on, despite language barriers, showed us that sports and relationships can truly transcend differences in culture, language, background, and age.

Dan, Kim’s younger brother, came into camp with a reluctant attitude. As we sat in a circle and played a name game during English class, Dan stuck his fingers in his ears and shook his head vigorously, refusing to participate in any way. The next day, Dan did not attend camp. However, on day three, he joined us for the sports session at the basketball courts. Still his attitude was not quite enthusiastic at any level. Instead he was off to the side coloring with chalk. Without speaking, I would draw outlines to shapes, and he filled them in, one by one until running out of chalk. The next day, we did the same, not speaking but following routine.  By the last day, we colored, played toss, and had tickle wars where Dan couldn’t help but smile and laugh. Still we said nothing, but communicated by gestures and running around and following each other. It was rewarding to see his attitude evolve as the camp progressed to the point where he was comfortable and even excited to be there. While there was definitely a wall between Dan and us on the first day, our time together slowly but surely began to tear it down. 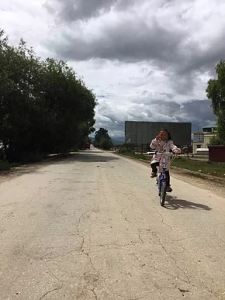