Wrapping up my experiences from Vietnam into one final blog post has been more difficult than I could’ve ever imagined.  It’s impossible to put into words how much the past three weeks have truly impacted me. Before leaving the States I remember sitting at the airport with almost a full day of travel ahead of me the thinking, “I have absolutely no idea what to expect.”

I hadn’t really gotten the opportunity to do much traveling outside the US. My only other international trip was to Mexico when I was younger.  This trip, however, was completely different in almost every way imaginable.  When I got off the plan in Ho Chi Minh City, it took me a few minutes to remember where I was. And it especially took a while to get acclimated to the hustle and bustle of the city’s motorbike-dominated streets.

As one of the English teachers on the trip, I was initially nervous about the language barrier.  At first it was a little challenging trying to communicate with all of the kids, but we quickly found solutions. One of my favorite lessons during camp focused on different ways to understand non-verbal communication.  I think one of the really valuable parts of the lesson came with teaching the kids a few phrases in sign language. Prior to Vietnam, I studied sign language with a couple of teammates back at Duke. On top of the phrases I remembered, my roommate, Morgan Hentz from Stanford Volleyball, had taken a few years of ASL so she was also able to help with coming up with useful phrases to teach the kids.  My personal favorite was “I love you” which is made by crossing your arms with balled fists over your chest. It also turned out this was the phrase that stuck with the kids the most out of anything also from lessons.  During our farewell visit, as the bus was pulling away one last time, there was a sea of green shirts with their arms crossed over their chests.  Telling us one last time that they loved us in a language we could all understand.

During our farewell visit, as the bus was pulling away one last time, there was a sea of green shirts with their arms crossed over their chests.  Telling us one last time that they loved us in a language we could all understand.

As much as I loved all the kids at camp there was one little guy who still holds a special place in my heart.  He was a sixth grader on my color team named Minh and the endless energy and excitement to learn that he brought everyday immediately drew me to him. Even without being able to fully communicate, Minh found ways to show how much he was enjoying camp.  An example that sticks with me is when at the end of class one day he gave me a marble out of the blue.  While a lot of people might not have thought twice about it, I could tell how much it meant to him when he gave it to me. I carried it with me the rest of my time in Vietnam.  During the final two weeks, we strengthened our bond through constant silly faces, trading candy, bad dance moves, endless hugs, high fives, and by doing our favorite sign language phrase, “I love you,” to each other at the start and end of each day.  Knowing that Minh would be waiting at the door of the bus every morning always made my day.  Although I may never get to see him again, his boundless energy and smiling face will be something I will carry with me for the rest of my life.

There was so much to learn from the way these kids went about life every day. During one-on-one conversations with the kids on my team I remember asking them if they could have one thing in the entire world what would they want. One of the quieter boys in class said that the only thing he wanted was a notebook for school. I often think about his response and how different answers would be if I asked the same question to middle schoolers in America that I know.  All of us take so much for granted in our everyday life and would never stop to think about something as simple as a notebook as being the thing someone would want most in the world.

In the short time I was there, they gave me a new perspective on life and all that life has to offer. As cliché as it may sound, the kids and the Vietnamese coaches working alongside us left a much bigger impact on me than I could ever leave on them.

Going into this experience with zero expectations allowed me to fully immerse in everything the Vietnamese culture had to offer. Although three weeks was nearly not as much time as I would have loved to have with all the amazing people in Vietnam.  In the short time I was there, they gave me a new perspective on life and all that life has to offer. As cliché as it may sound, the kids and the Vietnamese coaches working alongside us left a much bigger impact on me than I could ever leave on them. They taught me to view every situation in the best possible light and that spreading positivity and sharing what you have can go a long way. Their culture and way of life will always amaze me because even as strangers, they view themselves as one big family. I wish that we shared the same form of love with each other back home. Vietnam will forever hold a special place in my heart! 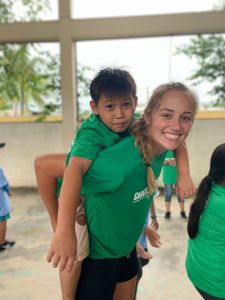